Strangely enough, when choosing a car, many people pay attention not to its technical characteristics, but to the presence of modern digital gadgets in the car. Consequently, the car’s infotainment system has a significant influence on car selection, because each driver wants to get a high-quality intuitive control system of car functions, which responds well to the requests.

So, we’ve carefully studied many modern information and entertainment systems of the cars, and are ready to announce the best of them…

A new touch screen and a round control knob simulate the management of infotainment systems, which are mainly installed in German cars. The tactile round button for controlling the functions of the car is very convenient for use while driving. The touch screen is very easy for entering the route on the navigation map. Navigation software is developed by Nokia.

Nevertheless, many users of this system have several typical complaints. Such functions as radio and connecting electronic gadgets via Bluetooth are too complicated to use compared to other systems in this rating. 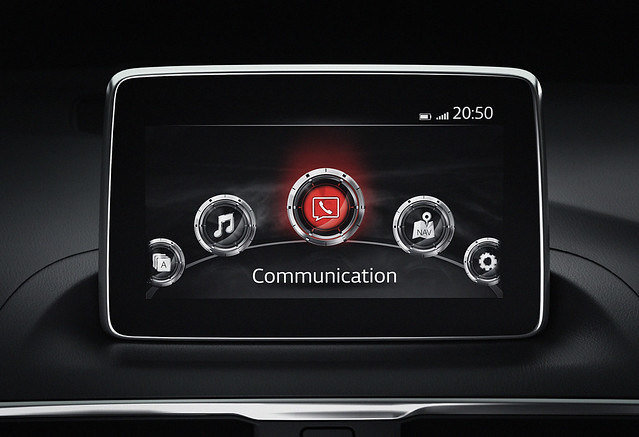 This information and entertainment system of Infiniti first appeared on the Q50 model. At first glance, two screens can be misleading. One screen is controlled by touching the LCD screen, and another display is controlled by the usual buttons. Unfortunately, the touch screen is not so fast when responding to touch. Both screens have high resolution, which makes the displayed information readable.

The only drawback is the rapid contamination of the screen from the fingers. Therefore, the driver always needs to have a rag to clean the screens.

Infiniti allows the system to connect the Internet to use social media on the car screen. It’s also possible to use Google search. In addition, the car manufacturer has provided the opportunity to use your smartphone to diagnose the car and display the vehicle’s fuel consumption, power reserve, speedometer and other data. 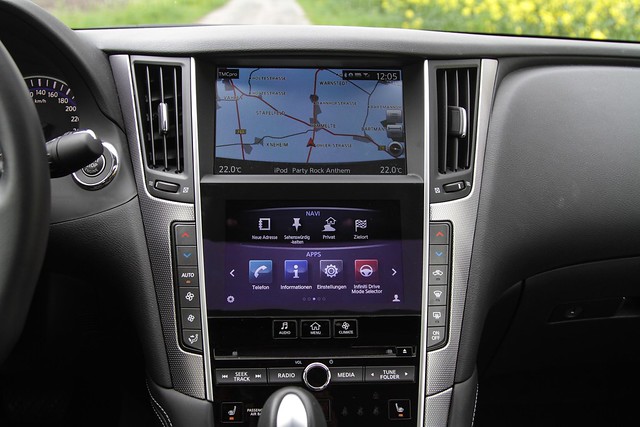 MyLink can be quite slow when responding to touching the touch screen. However, this system offers a wide range of options for setting up and connecting additional equipment. For example, if your car doesn’t have a navigation system, then you can connect your phone to the car’s infotainment system and display a navigation map from the phone on the car screen.

It should be noted that this option is only available on economy class cars (for example, Chevrolet Sonic, Spark, and Trax).

In addition to the touch control, MyLink system is expanded with several real buttons for quick and easy access to the most important functions of the car. 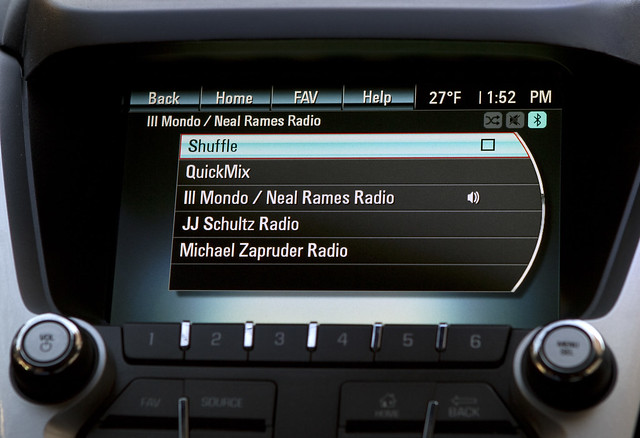 Excellent 3D-maps of the navigation system and the screen resolution of 800 × 480 make Audi infotainment system one of the greatest optional car tools. MMi system reacts clearly and quickly and therefore this system is in this rating. You don’t need much time to get used to using the system. The new version of MMi features a touchpad that allows you to respond to emails. 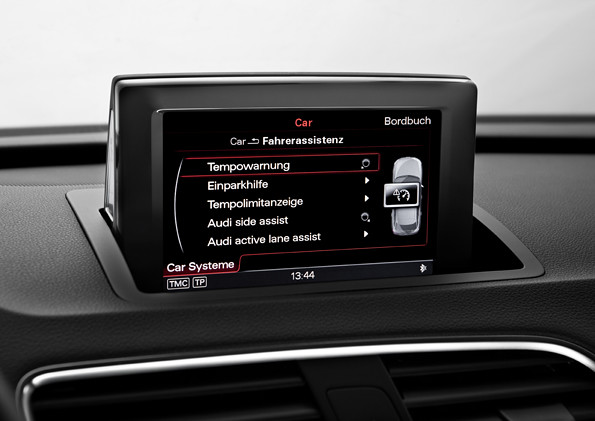 Mercedes Comand cannot boast of a beautiful artistic displaying of information on the screen, like other similar systems in the rating. However, the system works very well and it’s easy to use.

Mercedes has updated the Comand system in C-Class and S-Class cars by adding more colorful animation and new graphics effects. Hopefully, the ease of use remains the same as in previous versions of the system. 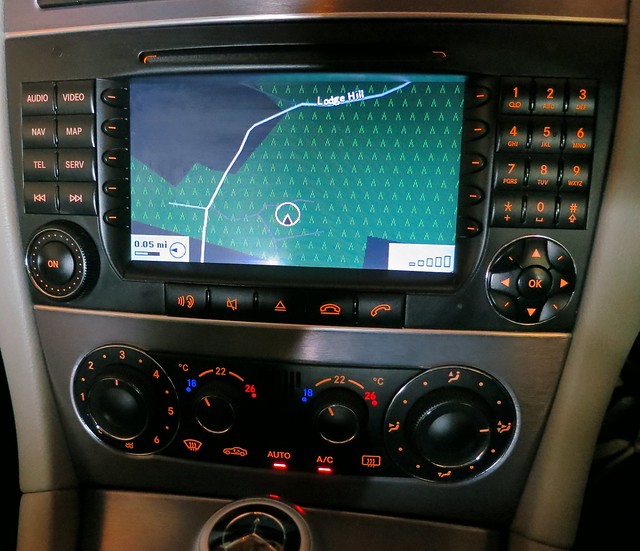 iDrive system appeared in 2001. Unfortunately, the first versions were awful and worked very badly, but nowadays this infotainment system is considered to be one of the best on the car market. The main feature of this system is the ability to customize the screen for segment displaying. As a result, you can simultaneously see on one screen the news of your favorite media and also set the map of the navigation system.

iDrive system is ergonomic and intuitive. The system control button is located in a convenient place next to the gearshift knob. In the most recent versions of the system BMW has installed a new integration of BMW ConnectedDrive, which provides access to your favorite social networks and e-mail.

The screen features a resolution of 1280 × 480 pixels – the visualization is impressive. 3D maps are characterized by a smooth sliding animation. 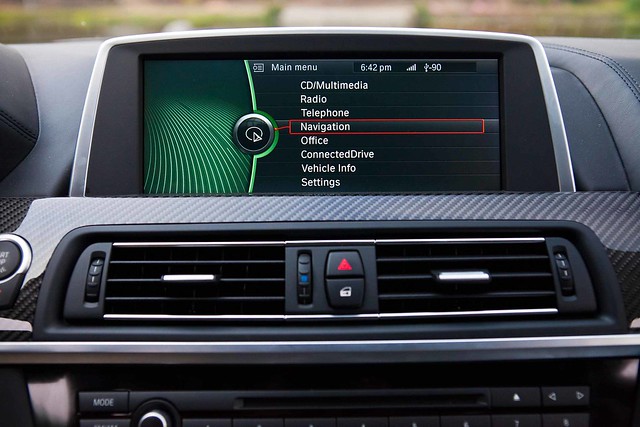 Undoubtedly, this is the best information and entertainment system presented on today’s car market. The system screen has bright and clear visual effects, as well as a high-quality touch response and convenient navigation program. Also, the system allows you to create a Wi-Fi hotspot. New Chrysler models are equipped with a special application that connects the car with your smartphone. Therefore, you can block and unlock the car alarm, and start the engine remotely. In addition, this application allows you to listen to the network radio on the car’s audio system with the help of the phone and the Internet.

Of course, there’s one disadvantage. The screen resolution of UConnect is just 640 x 480, which makes impossible to clearly display fine details. But against the backdrop of an intuitive interface, fast loading of data and tactile clarity of the touchscreen, this fact seems to be a trifle. 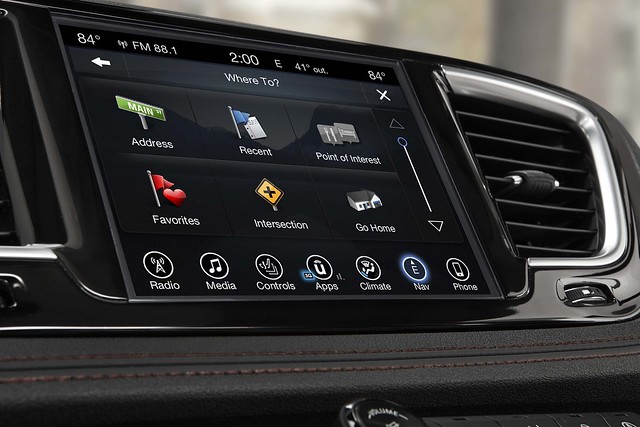 The car’s infotainment system is an excellent assistant. It allows finding any required information without distracting the driver, making it an essential tool for car travelers.

In view of this, you can choose a vehicle depending on the built-in infotainment system, and Rental24h.com application is the best way to find the desired car easily.